Hop On The Video Train 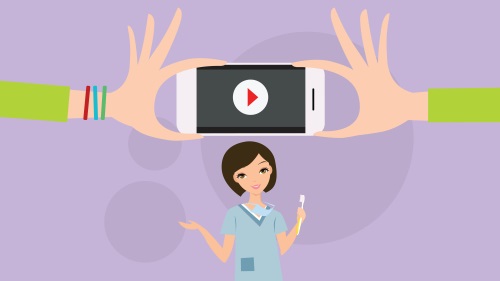 If you haven’t already noticed, video has become the latest and greatest asset when it comes to social media. All of the largest social platforms have hopped on the video train in the last year—quickly focusing their attention on this interactive, and connective strategy. Video is now a core aspect of networks like Facebook, Snapchat, Instagram, and Twitter. So when it comes down to creating a social media strategy for your practice, it’s not a bad idea to pay attention to what the experts are doing.

Let’s start with Facebook. Facebook Business knows firsthand how important videos are to a successful marketing strategy. Back in 2013 they explained that, “compelling sight, sound, and motion are often integral components of great marketing campaigns, particularly when brands want to increase awareness and attention over a short period of time.” In the past year, Facebook has made big efforts to focus more on videos and video advertising. Probably due to the fact that Facebook videos posted by users have increased by 94% annually in the U.S.

Here’s a funny statistic: the majority of Facebook videos are viewed without sound, meaning 85% of the videos watched don’t have sound playing but are still engaging viewers. This gives insight into just how powerful videos can be. If you think about it, most of the time when people are scrolling through Facebook on their phones they’re in public, so it makes sense that people are viewing videos without sound. No one wants the unwanted attention of their phone randomly blasting when a video autoplays. Generally, we can all agree that videos without sound are more convenient. When creating your own video content for your practice, keep in mind that subtitles are a plus for videos on Facebook because of this very statistic. They can increase watch time by up to 12%!

Facebook has recently implemented some new features you’ve probably already seen in action: Facebook Live and Facebook Stories. Facebook Live allows people to stream videos to their Facebook page in a way that other users can interact with the post and watch it in real time. After launching Facebook Live, Facebook strategically paid $50 million to a large amount of social media influencers in exchange for them to produce live content on their pages. Facebook Stories, is a feature that allows users to share videos straight to their friends’ inboxes or on their own story through a Snapchat-like camera with various filters. Clearly, there’s no doubt that Facebook is quick to adapt social media trends to its advantage.

Now, let’s take a look at what Snapchat has done recently. Snapchat’s platform has reached nearly half the number of daily video views that Facebook gets. That’s an impressive feat considering that Snapchat has a fraction of the users. This popular phone app has really staked its claim in the social media landscape. Its features include audio video calls, small video gifs, and the ability to write, draw, or place images/stickers on top of your videos. Not to mention its most popular feature—photo and video filters which allows users to change the way they look and/or apply backgrounds to their snaps. Snapchat was first known as an interactive app for sending pictures, but has successfully shifted over to become more video-centric.

Next up, the ever-so-popular mobile photo editing/sharing app: Instagram. Similar to Snapchat and Facebook, Instagram has recently implemented new video features for its users. The main one is the “Story” update, which got some heat when it first launched for being so similar to Snapchat. (It’s interesting to note that Instagram actually launched it’s story feature before Facebook did, but since the app is owned by Facebook it’s not entirely surprising that Facebook followed suit.) It allows users to post pictures or videos to their timeline that appears for all followers who click on their profile photo. They’ve also extended the length of time videos can be played on their app to 60 seconds instead of a mere 15. Like Facebook, Instagram also has a “Go live” setting that many social media stars and businesses are using regularly to connect with their audiences. This real-time feature allows users to comment on the live video until the stream goes offline.

Lastly, there’s Twitter. In 2016 video Tweets increased by over 50%, which could be largely attributed to the fact that Twitter went from allowing 30 second videos to 140 second videos. That’s quite the jump. In addition to allowing its users to post their personal video content, Twitter has also recently partnered with various sports organizations to live stream major sporting events such as the NFL’s Thursday Night Football. Since a large portion of Twitter users use the platform to check sports updates, the company was smart to use the video trend to their advantage. Especially at a time when more and more people are “cutting the cord” on cable and turning to the internet to consume content.

Needless to say, video content is no joke. Taking all of this information into consideration, it’s hard to not see how influential video is becoming for social media marketing. Videos can improve SEO rankings, build trust with patients, engage users to learn about new products, encourage sharing posts, and increase click-through rates in email marketing and social media campaigns.

Creating videos might sound intimidating, but it can be as simple as pulling out your phone and recording a short video documenting an office tour or a patient testimonial. If someone is having a birthday, record the office singing to them. If someone is getting their braces off, record their reaction upon seeing their new smile. If someone is playing a prank on patients for April Fools’, record it. There are lots of fun, easy ways you can implement video to your online marketing strategy.

If you wanted to go the extra mile, you could even take the time to create a high production video for a product or service you provide. Whatever the case may be, always keep in mind that videos lead to higher engagement and are a tool you should be taking advantage of. If you’re still short on ideas, talk to the Sesame Social team about how to incorporate videos into your practice. We would love to help you come up with unique content to share on your social media!